Here's a postcard from the Embedded Linux Conference. The clear winners of this year are the Internet of Things (IoT) and drones. There was one talk about UAVs last year and this year they have an entire track. That's something of a 20x increase in talks on the subject. Some goes for IoT which in addition to its own track also scored two of the keynote talks.

One thing that really struck me is how much needs to be done in IoT. Panasonic announced that they are open-sourcing their existing software stack. Intel is headlining their efforts in the Open Interconnect Consortium which includes Cisco as a diamond member (the highest category). Everyone is happy to announce how many people are on board but during the panel discussion the emphasis was on interoperability. Something tells me Apple Homekit will start with a huge advantage: Interoperability guaranteed. Intel presented an interesting talk about IoT security but today that is more concept than implementation.
Posted by Mike Matera at 3:31 PM No comments:

RA and Prefix Delegation on Ubuntu 14.04

I want my CIS-192 class to have access to public IP addresses for their projects. Unfortunately, there's just not enough IPv4 addresses for everyone. Rick setup prefix delegation on our router at school and I figured out how to integrate DHCP-PD and RA on Ubuntu. I based my efforts on the how-to here, but my network setup is quite different.

My network is loosely represented on the right. It consists of a Cisco router that is configured for SLAAC for addresses and prefix delegation for routers. Ubuntu has two interfaces. Their configuration is:

Before you begin Ubuntu has to be configured to forward IPv6 packets. The following sysctl settings are required to make that work:

Since I must accept RAs to be able to use eth0 this variable must be set to 2. Here's the IPv6 configuration of /etc/network/interfaces:

I've replaced my actual address with the RFC-3949 documentation address. Now I need to acquire a prefix from my DHCP server. I was not able to find any documentation that explained how to make the ISC DHCP client do this. Instead I installed the WIDE DHCP client:

Apt has a configuration script that asks what interface the DHCP client should use for performing DHCP. Be sure to set the interface that's facing the DCHP server (that's eth0 for me). The WIDE DHCP client needs to be told to ask for a prefix. In my case that's all it asks for.

It's worth describing the contents of the id-assoc stanza above. The information comes from the manual page. The DHCP client takes the prefix and computes new prefixes and interface addresses based on the lease and the information you've given. For each interface it generates the following:

The composition is a bit tricky, so let's take an example. Suppose you receive a lease for 2001:db8::/48 and you want to have up to 256 delegated subnets (i.e. sla-len is 8 bits) and had the following configuration:

If all worked correctly you would have the following configuration:

Astute observers will note that it's not possible to assign networks with a mask greater than 64. This means that if your DCHP server delegates /64 addresses (like mine does) you do not have any bits left for your sla-id so you must set sla-len to 0. If you don't set sla-len correctly the DHCP client silently fails. Grrr.

If all the above works you should be able to see an assigned address on your internal interface. The last step is to restart radvd and have it use the new address as the basis for sending out RAs. First configure radvd to pick up the prefix that's assigned to the interface:

The empty prefix (::/64) directive will initially cause an error because radvd starts before the prefix delegation happens. There doesn't seem to be a upstart-y way to fix that so I added the following line to the bottom of my /etc/wide-dhcpv6/dhcp6c-script:

Anytime the lease is renewed radvd will reload it's configuration files. This is probably close to what you want. The radvd.conf option DecrementLifetimes should probably be set to on. That is what you're supposed to do when you receive a prefix from DHCP. I haven't tried that option yet.

EDIT: This was necessary to make wide-dhcp start at the right time:

Posted by Mike Matera at 2:46 PM No comments: 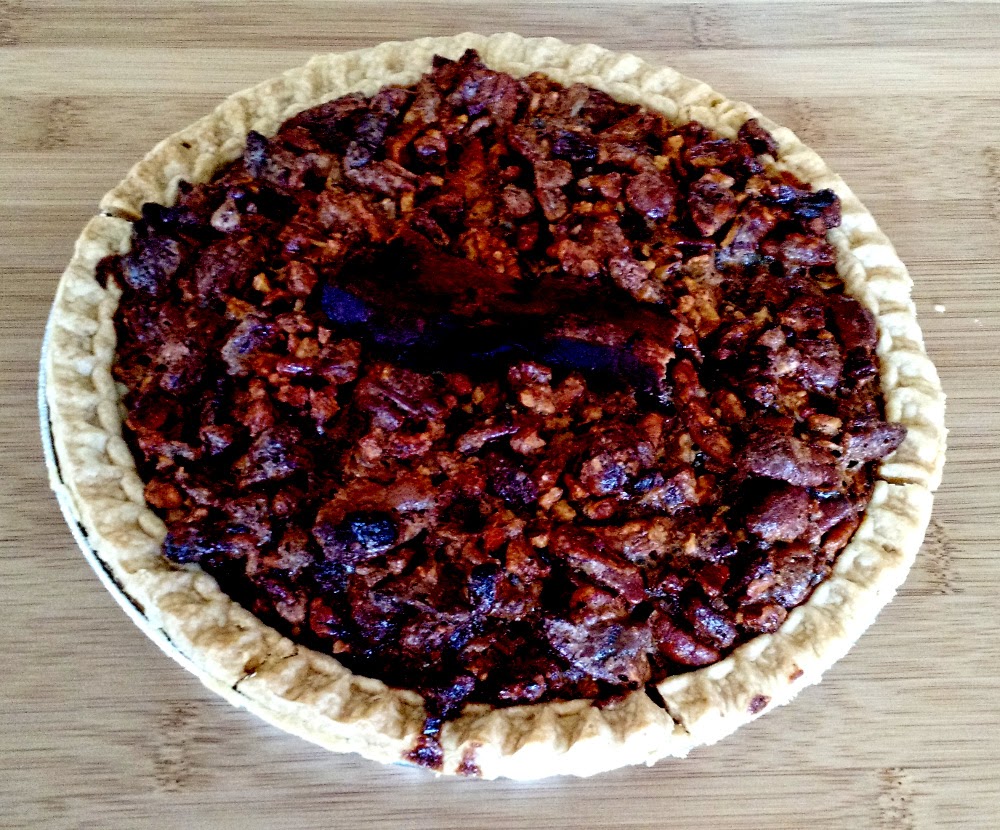 I made a pecan pie for Pi day. I love pecans but I've never liked pecan pie because the overly sweet goo is such a put-off. Corn syrup is much cheaper than pecans so I guess you get what you pay for. My pies turned out right on the edge of sweet and savory. I loved them. Here's my recipe.


Fry the bacon until it's crisp. Cut three strips into bits and save one for garnish. In a saucepan combine the sugar and syrup with two table spoons of bacon grease and heat until the sugar is dissolved. Stir smashed pecans and bacon bits into the syrup mixture and allow it to cool somewhat then stir in the beaten eggs. I baked mine in two prefab pie crusts at 400 degrees for 40 minutes.
Posted by Mike Matera at 2:09 PM No comments: